The Vancouver Industrial band Skinny Puppy, included several samples from 2001: A Space Odyssey in the track Rivers on their 1989 album Rabies.  Rivers also includes samples form Kubrick’s A Clockwork Orange and Polanski’s The Fearless Vampire Killers. It’s been been posted to YouTube including the scenes sampled – so good!

What happens when 2 authors release a book with the same title? In 2006 Emily Schultz published her debut novel Joyland (available in both print book and as an eBook), in 2014 Stephen King released his print only novel with the same title. Despite the fact that the eBook version of Joyland was authored by Emily Schultz, a few hundred people bought (online from Amazon), and read her eBook thinking it was Stephen King’s latest novel!!!!! Some of those people were confused and didn’t like “King’s‘ new book, so they returned to Schultz’s Amazon page to leave negative reviews.

The mistaken purchases resulted in a surprise royalty check for Schultz and because she is an artist, she took the experience to the next level and blogged about how she spent Stephen King’s money.

More about the reading brain, how to keep and improve your reading skills online and an interview with the “accomplished reader” Maryanne Wolf. 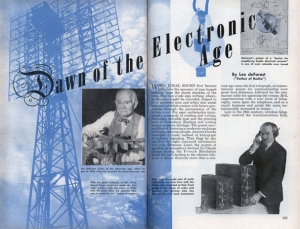 The “Father of Radio” – Lee deForest’s 1952 article Dawn of the Electronic Age (Jan, 1952) in full in Popular Mechanics with images of an atom smasher,  a 1929 TV camera and an electric selective-sequence calculator!

Food for Thoughts
“It would be a shame if brilliant technology were to end up threatening the kind of intellect that produced it.” – Edward Tenner

Watch the TED talk of historian and tech writer Edward Tenner discussing the unintended consequences of new inventions and their impact(s) on the world.
https://embed-ssl.ted.com/talks/edward_tenner_unintended_consequences.html

We are thinking about:

Good stuff from the web